Preparation for a Three Gorges cruise 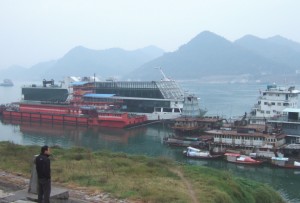 To view the Three Gorges of the Yangtze river the standard itinerary has embarkation at Chongqing, followed by a down-river cruise, so I decided to start from the other end, the city of Yichang in the west of Hubei province, and work my way upstream.

Arrival at Yichang
The flight north from Hong Kong takes an hour, then it’s a twelve mile bus ride from the airport to the city centre. 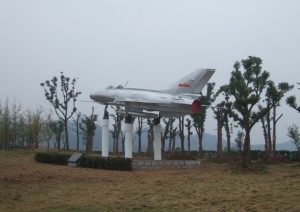 Despite the darkness outside, sitting in the bus and refering to the local map bought at the airport I managed to follow my bus’s progress. Dropped at the city centre, a stroll, a couple of conversations and a short taxi ride, brought me to the hotel at which I’ve booked a room. The two receptionists seemed delighted to have me check in to their hotel, so my visit was getting off to a good start.

Although the sky was a grey sheet of cloud, and the air damp the following morning, it felt good to be back in China as I set off to explore this Yangtze riverside city, and ascertain the means of making my way up through the Three Gorges. First thing was to procure a map of western Hubei and points west.

Essential supplies
In China the place you will find a selection of maps is the Xinhua bookshop 新华书店. There are other bookshops in to be found in towns in China, but they are generally modest, one room affairs, whilst a Xinhua bookshop will be spacious, and probably have two or more floors. The Xinhua bookshop is always marked on local maps sold in Chinese towns and cities, so the map of Yichang I’d bought at the airport showed me its location. Helped by the shop’s friendly staff, I found a couple of good maps, then walked on to see about transport. 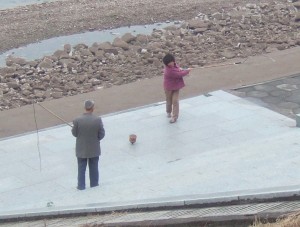 Yangtze riverside attractions
On the way to the ferry ticket office I came across a bicycle shop, one hiring out, as well as selling bikes. For the price of a cup of coffee I got to enjoy a few hours cycling, taking in views from the bridge crossing over the river from the city to the south side of the Yangtze, and exploring south bank attractions. I made it as far as the entrance to a hydro-electric power plant a few miles upstream, where security guards advised me to beat a retreat. Eventually I returned to base with three souvenir snaps – fun with whips, a big outdoor portrait of Mao, and a fighter jet on a plinth. 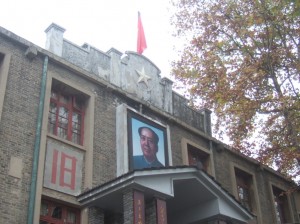 Embarkation
I’d booked a berth on the slow boat up the river through two of the gorges departing at nine in the evening. At quarter to nine at the ferry port there was not sign of fellow passengers , nor any sign of a ship, but as all seemed fine with the staff and their inspection of my ticket, I felt reasonably reassured. Eventually I was guided out of the waiting area and on to a coach. It soon became apparent that I would not be embarking at Yichang after all, as the coach had cruised away from the passenger ferry area, through Yichang city, and on and on westward, until after about forty minutes’ travel, I, the sole passenger on the bus, was advised that we had arrived, and would I please leave the vehicle? 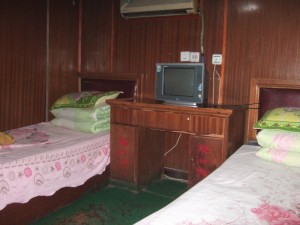 It’s dark, there’s water; on it is a ship. It’s my ship. My ship, and no one else’s – I’m the only passenger! All (me) aboard, and off we cruise. I have a cabin. It has two single beds and a television that doesn’t work. The electric kettle does though, and so I get to eat a hot meal, albeit pot noodles bought from the tiny on-board shop (which also provides beer, nuts and crisps).

I was out to make the journey on the cheap. With money to spare you might want to do it through this company  –  Victoria Cruises

(This tale continues in this post: Gorges missed, viewed and compared.)