Fuxi and the Magic Tortoise 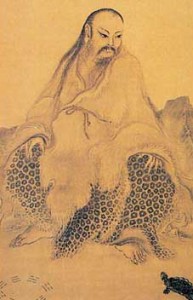 Living not that far from the centre of London, it is relatively easy for me to get into town to attend regularly at the London Mandarin Learners Meet-up group. Here I get to meet up with others to attempt translation from Chinese into English of a piece of text. Last time we tackled a very short story about the theft of a precious tree. It had mention of the mausoleum of Fuxi. He is a personage I recall from his appearance in the Book of Changes, something to do with the interpretation of marks on the back of a magic tortoise (there it is  in the bottom right of the picture!). Let’s take a look.

In his introduction to his translation of the book into German, Richard Wilhelm writes:

In Chinese literature four holy men are cited as the authors of the Book of Changes, namely, Fu Xi, King Wen, the Duke of Zhou and Confucius.

The text itself claims: 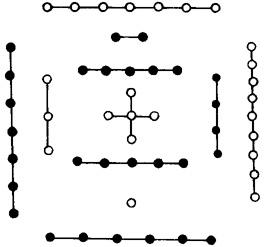 The Yellow River brought forth a map and the Lo River brought forth a writing; the holy men took these as models.
When in early antiquity Bao Xi (aka Fu Xi) ruled the world, he looked upward and contemplated the images in the heavens; he looked downward and contemplated the patterns on earth. He contemplated the markings of birds and beasts and the adaptations to the regions. He proceeded directly from himself and indirectly from objects. Thus he invented the eight trigrams in order to enter into connection with the virtues of the light of the gods and to regulate the conditions of all beings. He made knotted cords and used them for nets and baskets in hunting and fishing. He probably took this from the hexagram of the Clinging.

Expanding on this, two thousand years ago Ban Gu wrote: 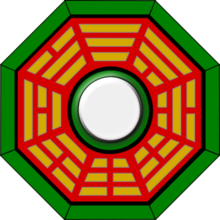 Fuxi’s arrangement of the trigrams

In the beginning there was as yet no moral nor social order. Men knew only their mothers, not their fathers. When hungry, they searched for food; when satisfied, they threw away the remnants. They devoured their food hide and hair, drank the blood, and clad themselves in skins and rushes. Fu Xi looked upward and contemplated the images in the heavens; he looked downward and contemplated the occurences on earth. He united man and wife, regulated the five stages of change, and laid down the laws of humanity. He devised the eight trigrams, in order to gain mastery over the world.

The New World Encyclopaedia Organisation has an entry about Fu Xi telling of the magic tortoise/turtle:

Fu Xi had the arrangement of the Eight Trigrams of the Book of Changes revealed to him supernaturally while reading the Yellow River Map. Fu Hsi is said to have discovered the arrangement in markings on the back of a mythical dragon-horse (sometimes said to be a turtle) that emerged from the river Luo.