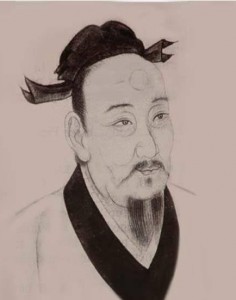 Chinese people sometimes exclaim “Great name!” upon hearing my Chinese name is Gongsun Hai. Gongsun is a rarity amongst Chinese surnames, and has the distinction of being one of those few formed by two characters, rather than a single one.
Noteworthy Gongsuns? There was Gongsun Chou who couldn’t get enough of the wise words of Mencius the Confucius fan, and Gongsun Long whose fixation on names had him famously proclaim “a white horse is not a horse”, but is this really the best we Gongsun’s have to offer?

It is only recently that I have discovered why my Chinese name is so “great” – I share a surname with the founder of Chinese civilisation – the Yellow Emperor !
…. not that Zhuangzi the Daoist thought much of him:

The Yellow Emperor had been established as the Son of Heaven for nineteen years and his orders were carried out by all under heaven, when he heard Master Broadly Complete was staying on Mount Emptysame, so he went to see him. “I have heard that you sir, are accomplished in the ultimate Way,” said the Yellow Emperor. “I venture to ask what the essence of the ultimate way is. I wish to take the essence of heaven and earth to assist the growth of the five grains for the nourishment of the people. I also wish to direct the yin and the yang to conform with the needs of all living beings. What should I do in order to accomplish this?”
“That which you wish to ask about,” aid Master Broadly Complete, “is the original substance of things. That which you wish to direct is the residue of things. Ever since you have governed all under heaven, the cloudy vapours have released their moisture before gathering, the trees and grasses have shed their leaves before turning yellow, and the light of the sun and moon have grown increasingly dim. You have the mind of a garrulous flatterer and are unfit to be told about the ultimate Way!”

(More ancient wisdom from China: Fuxi and the Magic Tortoise.)