Home / Poems / Altair is Far Away

Altair is Far Away 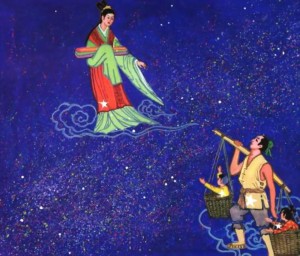 Another set of Chinese characters I succeeded in memorising whilst waiting at traffic lights in Taipei were those forming the text of one of the ‘Nineteen Ancient Poems’.
‘Altair is Far Away’ tells of the Weaving Maid weeping with grief as she stands parted from her husband and their children who dwell on the far side of the Milky Way.

The Cowherd star is far away. the Silver River Lady shines brightly.
Finest cloth should be running through her fingers as the shuttle hums,
but all day long she has produced nothing, as her tears have been falling like rain into the celestial river, as she grieves at the distance between them.
No matter the clarity and shallowness of the water, still they cannot speak, but just gaze affectionalely at each other. 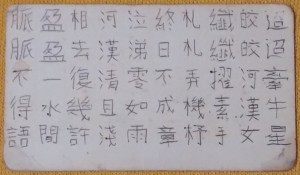 The story of the Cowherd Boy and the Weaving Maid has the mortal boy win the love of an immortal who is the seventh daughter of the Lady Queen Mother of Heaven. Prior to her marriage she weaves vibrant colourful cloth every morning and evening in the sky. After marriage the pair lead a blissful life for several years and have two children; but then the Lady Queen Mother seizes the girl and hauls her back to the heavens. Assisted by a magic ox, who fortuitously is one of the boy’s herd, the Herdboy, together with the two kids, flies up in pursuit, only to find that in the heavens the Lady Queen Mother has created a river that serves as a barrier between the two lovers. Herd Boy becomes the star Altair, Weaving Girl the star Vega which we can view on opposite sides of the Milky Way. But once a year, on the seventh day of the seventh month they get to meet when magpies form a bridge across the Silver River (although the poem, focusing on the sorrow of thwarted love, leaves that bit out).

The story is widely known in East Asia, and is the backdrop to ‘Chinese Valentine’s Day’ the Qixi Festival on the seventh day of the seventh lunar month (9th August in 2016).

Professor Zhao of Suzhou University introduced me to this poem, and also said,
“The Nineteen Ancient Poems 故诗十九首 were written by anonymous scholars during the later Han dynasty (25 – 220 A.D.) The Wen Xuan 文选 the oldest book containing them was put together by prince Xiao Tong 萧统 during the Liang dynasty (502 – 556). As well as folk songs and literary poems this compilation also contains prose and letters, and after Xiao Tong’s death became known as the Zhao Ming Wen Xuan 昭明文选 .”

(The above continues from here: Poem Cards Beat Waiting Blues.)